Factorio is a game where you build and maintain factories. As part of the game, you end up routing goods on conveyor belts. One pattern is to create so-called busses where goods are centralised. Each bus consists of four lanes where goods flow in one direction. Factories can then fork the bus lanes to re-route some of the goods from the bus to factories that need it. But what is the best way to fork these bus lanes to ensure that goods still remain available at the end of the bus? 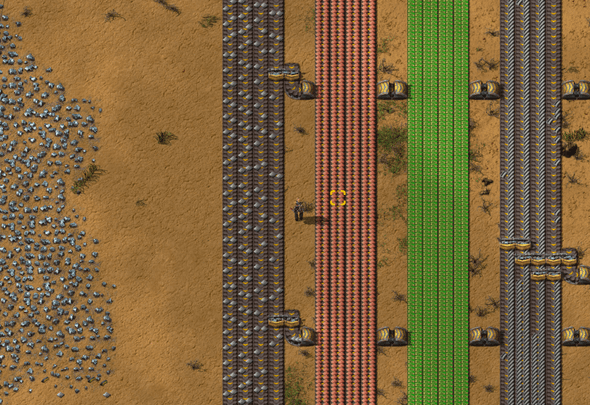 A screenshot of four main busses in Factorio. Note the leftmost iron plate bus flows from top to bottom and gets forked twice into underground belts that cross the other busses towards the right. A splitter is present at each fork and ensures the flow gets divided into a new lane. Note that the rightmost lane is almost emptied of goods after the two forks.

In order to fork the bus lane, so-called splitters are built. They enforce that the total input flow is distributed evenly across output lanes.

Mathematically, this means that the output flow ϕout​ on each of the nout​ output lanes is defined as

where ϕi​ is the input flow of the i-th input (note that it is possible to use splitters with only one input or one output).

When items are needed on either side of the bus for crafting, a fork will be created whereby one lane will be divided in two using a splitter: one output lane will be forked and routed to factories, and one output lane will stay on the bus for later use. Assuming a nominal flow of 1 item per second for each lane of the bus, the forking operation will result in a division by two of the nominal flow which turns into 21​ on the forked lanes.

If the same lane is forked over and over again (as is seen in the previous figure), the flow will drastically reduce as a sequence of divisions by two with the recurrence relation

where n is the number of forks. After the N-th fork, the flow on the forked lane is therefore

This series yields 21​, 41​, 81​, 161​, 321​ … and will very quickly approach zero at exponential speeds. In the figure above, it is clearly visible that the number of items on the rightmost lane is drastically reduced after each fork. It is therefore essential to rebalance the flow to ensure that following forks also use items from the other lanes.

A first idea is to add a splitter which will rebalance the flow after each fork. Instead of having a remaining flow of 21​ at the first fork, adding the balancing of the 3rd and 4th lane with respective flows of 1 and 21​ will yield a flow at the 4th lane of

which represents a welcomed 50% improvement over the situation where no rebalancing took place (the remaining flow there was 21​).

Adding a splitter between the 3rd and 4th lane right after the fork enables to rebalance the flow.. to a certain extent.

and it can be visualised in the follow graphical representation

Graphical representation of the flow rebalancing.

After the N-th fork, the flow on the forked lane is now

However, this is clearly not optimal as the two leftmost lanes have still not distributed their load evenly. So what does the optimal solution look like?

Let’s figure out what is the best output flow that we can hope to achieve. Suppose that we after the n-th fork have achieved optimal flow ϕ⋆(n), defined by the fact that all four lanes have the same flow. How do we make sure that the next fork stays optimal?

When adding a fork, the flow that is irrevocably lost is 21​ϕ⋆(n) as half of it remains in the bus and half of it will be used elsewhere. The total flow of the 4-lane bus goes from 4ϕ⋆(n) to

as we subtract the flow that has been forked. After the fork, the optimal flow is achieved when the total remaining flow is evenly distributed across all 4 lanes. This yields the recurrence

After the N-th fork, the flow on the forked lane is now

Interestingly enough, the recurrence relation can be rewritten as

Note that the second step in the procedure actually can be applied to two sets of lanes as there are two outputs from the first step, and two unforked lanes to recombine these outputs with. Each of the two lanes will produce an optimal flow, and each need to be applied to ensure all lanes reach optimal flow (see figure below). 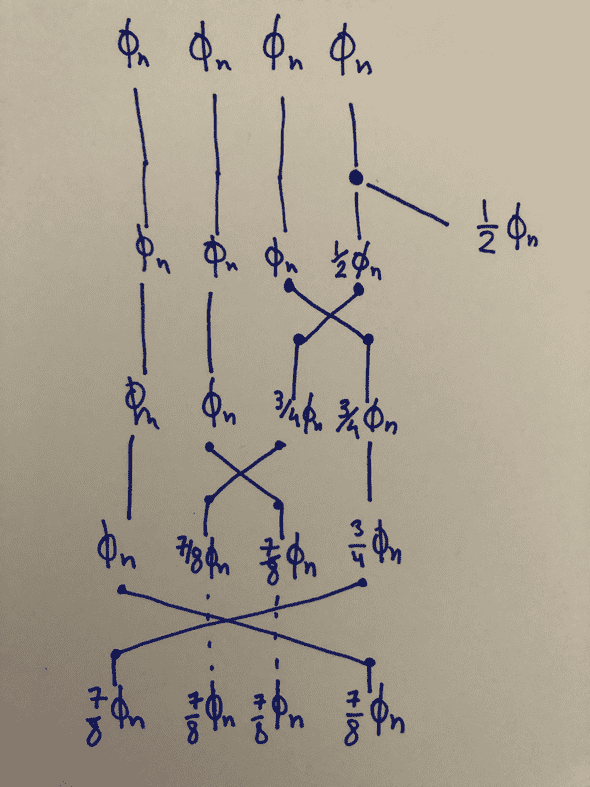 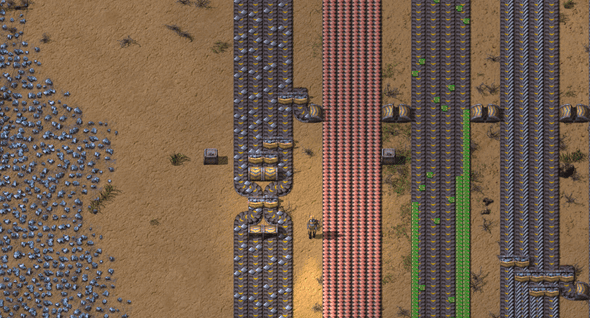 Turns out Factorio has a wiki entry just about this.

A few lines of python help us picture just how drastic such an improvement is: